Two Markets Divided By One Pond 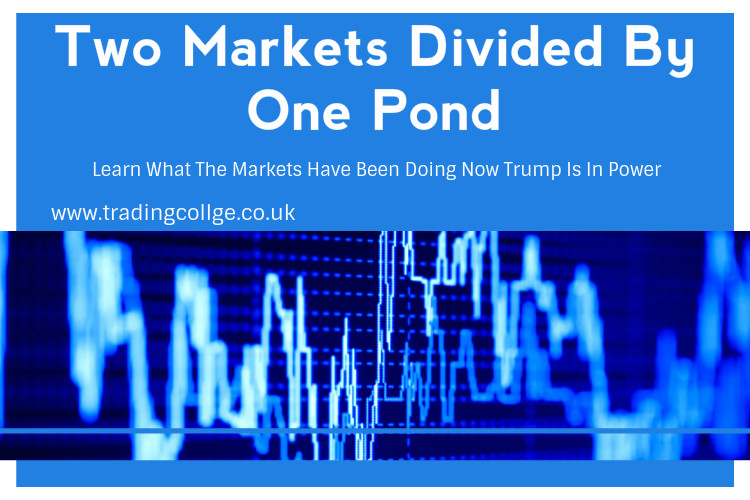 This week we look back at what the markets have been doing since Trump took power, and how his actions should, or rather should not, affect your trading plan.

The new U.S. President is a complete anomaly in that he has no previous political experience. Naturally everyone has been nervous, but so far the U.S. markets have rallied. Donald Trump is, first and foremost, a businessman, and since his inauguration he has been busy fulfilling many of his election campaign promises. In particular, he is signing legislation that favours business by reducing regulations on industry, and the U.S. market has been responding favourably. Last Wednesday, the Dow Jones broke 20,000 for the first time ever. Trump seems to be acting like a good businessman, making decisions and carrying them out like any good business owner would. The markets like this kind of certainty, which is why they are responding so well.

On The Other Side Of The Pond

George Bernard Shaw once said, “England and America are two countries divided by a common language.” At the moment the U.S. and U.K. markets look like two markets divided by one pond! While things are looking rosy in the U.S. markets, the situation is not so good in the U.K. Perhaps in response to Brexit deal decisions still being in debate, the U.K. markets are lagging behind the U.S. ones. The FTSE 100 recently had a sell off from around the 7360 mark all the way down to 7150. So, depending on which market you’re trading, things are looking very different.

So how do we respond to all the news… the daily announcements about Trump’s latest words and actions? The answer is we do not respond to any of it. We are technical analysis traders, not economic speculators, so the only thing we respond to is whatever we see on our charts. We look at our charts and prices, and we trade what we see. Do not let whatever is going on in the world affect your trading decisions.

Everyone has a honeymoon period in a new job, and who knows what might lie in store for the U.S. in the future. The U.S. markets are at an all time high, but what goes up must come down. There will undoubtedly be a point at which Trump experiences some disappointments and setbacks in his presidency. The markets are likely to respond to this and we could see a sharp drop. But the point is, we still don’t respond to this possibility or predict when this could happen. Again, because we are technical analysts, we keep trading what we see on our charts.

Use these turbulent, changing times to test yourself. This could be the biggest test to date of your discipline. To be able to shut out what you hear on a daily basis and stick to your trading plan, to trade what you see on your charts regardless of what you see on the news, could be a huge challenge for you, especially if you feel personally affected by whatever decisions Trump takes. Whatever your opinion, keep your politics out of your trading. Trade what you see, never what you hear or feel!