Trader Of The Month: September

Congratulations to Hakan ‘Harry’ Suleyman for being chosen as September’s Trader of the Month!

Harry says, “It’s great that I have been chosen as the trader of the month for September, that is an excellent 50th Birthday gift for 1st September, hooray!” The coaches chose Harry due to his inspirational trading journey; since starting his Mentorship, Harry has been able to turn around his trading and become consistently profitable.

Let’s Get To Know Harry 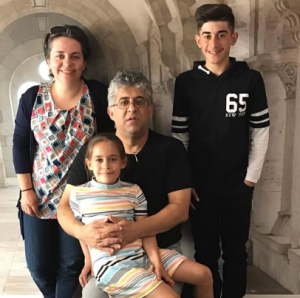 Hakan Suleyman- Trader Of The Month

Harry is a full-time dad, managing director and partner of a successful Executive Chauffeur Business based in London. He maintains a very busy lifestyle managing trading, his business and spending time with his family. It is apparent that hard work and motivation runs in the family with Harry’s children taking part in The Kickboxing World Cup and excelling at other extra-curricular activities. That being said, Harry ensures there is also time for enjoying the little things in life. The Suleyman family recently returned from a 3-week holiday in sunny Cyprus where they even tried parasailing! Harry could place trades in the morning, go and enjoy the sunshine and return to winning trades- great result!

Trading is not only a hobby for Harry but also a second income. His long-term goal is to eventually take a backseat in managing his company and trade full-time so that he can spend more quality time with his family. Currently, Harry is easily able to fit trading around his career, as he follows the 4-hour time frame. Harry says, “I wake up in the morning so that I can analyse the markets and see what’s setting up, and then I return in the afternoon to monitor my trades and evaluate. It’s easy peasy!”

Harry first became interested in trading around 4 years ago when he decided that he wanted to find a way that he could earn money online, working from home. After a google search, he was met with a range of options and soon discovered trading. Harry joined another trading group but soon left as it was not working well for him.  During his research, he learned about Lee Sandford, MD of Trading College and was keen to learn more about trading from Lee.

Eventually, Harry attended one of Trading College’s 1 Day Courses in London and knew then he wanted to pursue trading. He decided to take the leap and signed up for the Mentorship in March 2017 and has not looked back since. Harry says, “My only regret is that I wish I had started my Mentorship 3 years ago!” The Mentorship has provided Harry with valuable education and guidance from both coaches and students and it has provided him with a good community of traders that learn together and support one another. He has found the live trading room and alert service the most beneficial aspects of his Mentorship and would like to continue with this after his Mentorship ends.

Harry’s trading journey is an inspirational one. Harry explains how his first two months were a learning curve as he struggled to get to grips with certain strategies; he also realised that his mindset was a big player in why he was not winning trades. During this time, he received support and guidance from his coach and from the community of students. With all the support and education, Harry was able to turn his trading around.

The Path To Success

One of the most valuable courses Harry found as part of the Mentorship was ‘Trader’s Rehab’ which is focused on trading psychology and mindset. Harry learned that if you are struggling, to take a step back for a week and not place any trades. He explains, “It’s important to use this time to back test and evaluate what you did wrong and compare it against your back testing. You can then evaluate this, reorganise and start again! Don’t chase the trade.” It is common for new traders to be full of emotions and panic and pull out of trades too early.  If you learn to work on your emotions, you will gain the confidence and not have to worry or panic.

It was then when Harry had a lightbulb moment, started to grasp his strategies and was able to take control of his emotions while trading. In his third month, Harry was able to recover all of the losses he had in the first two months! The following month is where he started to see consistent profits. In fact, at the beginning of August, his winning trades paid for his entire family’s flights to Cyprus and back!

Last month, Harry saw an 80% success rate and he has put this down to his consistent dedication to learning and sticking to his strategies and working on his mindset. The strategies that Harry has found to be the most successful for him are the momentum type strategies where you trade with the trend.

Harry’s Advice To Other Traders

His advice to other traders is to find the strategies that work for you, learn them well and stick to them. There is no point in overcomplicating your trading by using too many strategies, keep it simple! Harry says, “Pick a strategy, focus on it and you will be winning trades!” Harry believes it is necessary for all traders to get a trading education before diving in; there are a lot of aspects to understand in trading first. Although consistently profitable, if he does lose a trade, he just views it as a ‘business expense’ and he learns from it. “It is a constant learning experience but it is important to focus on psychology and your confidence. Once you have mastered this, you are on your way to becoming a consistently profitable trader!” Harry explains.

Congratulations, again, on being picked as Trader Of The Month Harry! Thanks for sharing your trading journey and advice with us and good luck for the future!