Titanic Trades in this Market Update

Speak to us about our courses

“Go away in May come back St Ledges Day” is the old saying for when traders traditionally pack up their bags and head to their holiday homes.

Normally this has an impact on trading volumes but not this year! We have seen incredible trading results from our strategies again this month.

Before we jump into the video and the price action that occurred both last week and this, I want to share with you details of some of the trades that we took.

We’re talking about a 400 point short trade in the USDCAD, a 200 point profit long in GBPNZD in 4 days (that’s still up and running) and, our favourite recent trade, the short trade in the NASDAQ that has brought in over a 1,000 point return.

Our students are having a field day trading in this environment. One of them is Stuart, who just yesterday brought in 355 points in 1 day shorting the Nasdaq, which we had been looking to do for a couple of weeks. Here is his message to me on Wednesday evening.

This got me thinking. You see, I’ve been trading from charts for 18 years and, let me tell you, it is possible to reliably predict market moves before they happen. I’ve always said that the price on a chart is what you want to focus on, not the news – which can be hushed up, delayed or spun to suit a certain narrative.

Let me give you a recent example where news came second to technical analysis. In this instance, we’ll be looking at Tesla and Elon Musk. On Monday the CEO of Tesla Motors tweeted that they would stop allowing Bitcoin to be used to purchase their cars. The share price didn’t like this turn of events and dropped. However, we already had a short signal on our charts last week to sell the stock. See the chart below showing last week’s red short signal. 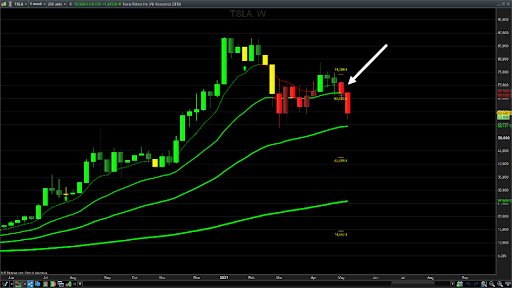 In addition to Tesla we have seen the same pattern and preceding short signal in the indoor exercise equipment manufacturer, Peloton, who had a big drop before the news came out of a massive product recall.

For the traditional investor these sorts of comments might seem confusing but to an experienced trader these types of trading events are regular occurrences.

Successful trading is all about being correctly positioned to take full advantage of these big market moves.

When the German Dax was up 19%, we had a trade that moved higher by 2,481 points. When the Ashstead Group saw 130% growth. When Gold shot up 6% over the course of 1 month. When Crude Oil prices went from $40 to $64. These are big moves that you need to be taking full advantage of.

Let’s not forget the big boom in commodities that we have also been trading and tracking.

Soybeans rose by 92% which resulted in a 801 point move. Lumber moved higher by 176%, coffee up 20% and sugar increasing by 52%. Once again, these are very big trades and, when positioned correctly, you’ll see correspondingly big profits.

A few months back in our Weekly Scan Club webinar I was telling our students about these trades and we then watched them unfold. 2020/21 has been a strange period of our lives but it’s also been an extremely exciting time to trade the markets. However, even if lockdown (thankfully) seems to finally be drawing to an end, I don’t think we’re anywhere close to seeing the end of these massive market movements and big profit trades.

You see, we have been in the midst of the biggest Bull Market in stock history and as a result most people have become complacent when it comes to stocks. Thinking that they will continue to go up and up forever. As traders, we know that is never the case as a price on a chart moves in waves. Waves that go both north and south.

These waves make higher highs in an uptrend but for the last month, we have seen the cracks start to appear in these higher-high waves. I prepare all of our Trading College students for the next major moves.

So how much lower can the stock markets go? Are we going to see new all-time highs and the Bull Market continue? Well, we use our systems and strategies to tell us that and let them show us the way. We don’t hope, guess or predict. We trade the price and pattern on a chart and bolt on our Momentum trading system and this gives us a huge edge in the markets.

To find out more watch this week’s market update below as I show you exactly what’s happened and how you can take advantage of the next wave of titanic trades in the near future.