How To Read A Candlestick Chart 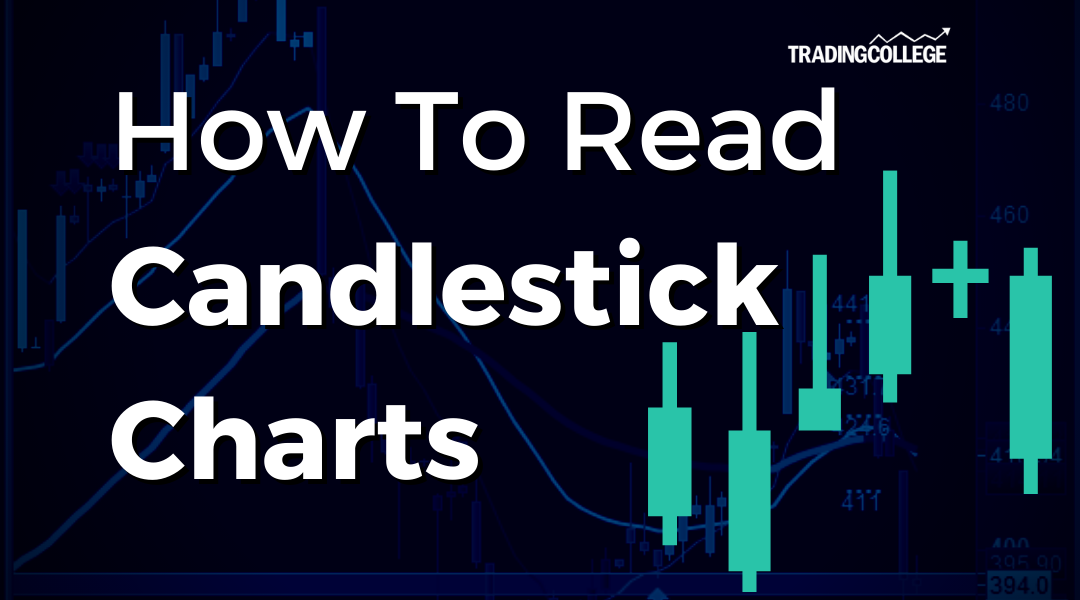 Candlesticks have been used to display price charts for a long time, dating back many centuries. History records candlestick charts first being used by the Japanese in their rice markets back in the 1600s and they became popular in the Western world in the late 1980s. But enough of the history lesson, let’s focus on how you can read these graphs and, more importantly, how they can inform your trades.

Construction Of A Candlestick (Figure.1)

Candlesticks display four important pieces of information about the price in any given market: the Open, High, Low and Close (known commonly as OHLC). Candlesticks can be used to display information about price movement in different timeframes but, for the purposes of this article, the daily timeframe will be used.

Figure 1: Construction of a Candlestick:

A green candlestick means that price closed higher than it opened, while a red candlestick means that price closed lower than it opened.  A succession of candlesticks with closing prices higher than opening prices (GREEN) would therefore suggest that the market is trending upwards. By the same token, a succession of candles with closing prices lower than opening prices (RED) would suggest that the market is in a downwards trend.

We shall now look at some popular candlestick patterns. Some foreshadow price reversals whilst others represent continuation patterns.

A Hammer is a long tail candlestick with a small body near the top end of the candlestick.  You might have guessed already but it gets its name from the common tool used by handymen because of their resemblance in shape. The long tail (or lower shadow) should be at least twice the height of the real body of the candlestick. When the hammer candlestick appears in a mature downtrend, it usually signals the end of that downtrend.  It literally “hammers out the bottom” of the downtrend and represents a failed attempt by sellers to keep price going down, a point at which buyers step in and end the downtrend.

The Shooting Star candlestick is the opposite in shape to the above Hammer. It has a long upper shadow with a small body near the bottom end of the candlestick. The lower shadow tends to be quite small and the long upper shadow should be at least twice the height of the real body of the candlestick. When the Shooting Star candle appears in a mature uptrend, it usually signals the end of the uptrend. It represents a failed attempt by buyers to keep the price up, a point at which it tips to the sellers who step in and end the uptrend.

A Doji candlestick has a very small, or even no real body.  The market closes at or very close to the same level at which it opened. The Doji candlestick therefore represents indecision by the market’s participants, with no party committed to either buying or selling. 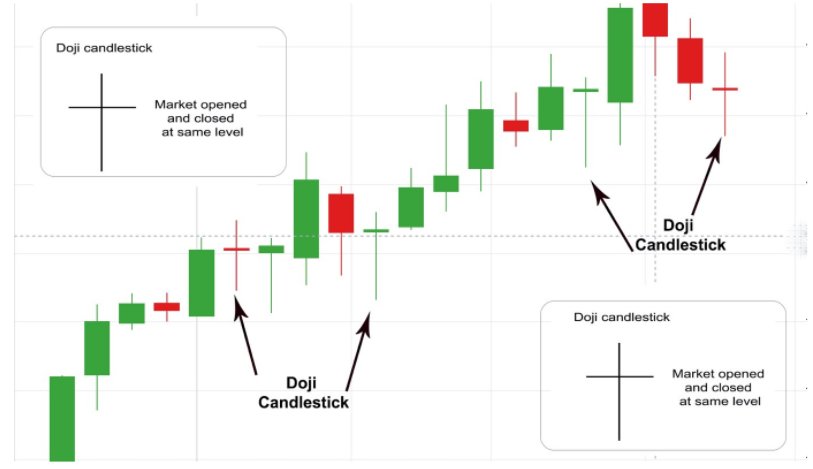 The second candlestick is usually the bigger of the two, hence its ability to eclipse or dominate the first as it usually has enough strength, dominance and momentum behind it to swing the market in its direction and reverse the prevailing trend. 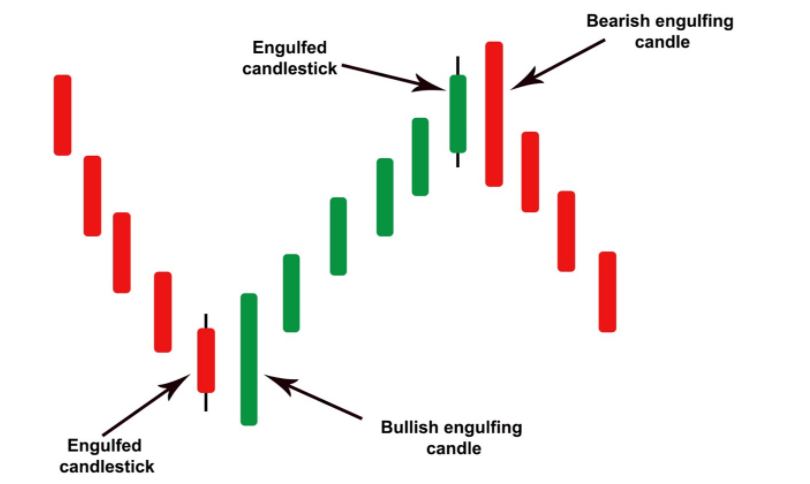 This candlestick pattern is seen both during an uptrend or a downtrend, effectively when there is a pause in the trend. The market “pauses” to catch its breath before continuing in the same direction of travel. Figure 7 demonstrates the continuation patterns where a Hammer candlestick reverses the downtrend and a Shooting Star candlestick forms at the top of the uptrend.

In an uptrend, following a strong upward move, the trend pauses as price action temporarily slows down.

Three or so small ranging candlesticks appear and all drift downwards, in the opposite direction to the prevailing up trend. However, the combined range of the small downward drifting candlestick is less than the span of the last upward candlestick before the pause (Figure 7). The market then resumes its previous direction of travel upwards with a strong candlestick that makes a bold statement in favour of a continuation of the uptrend. 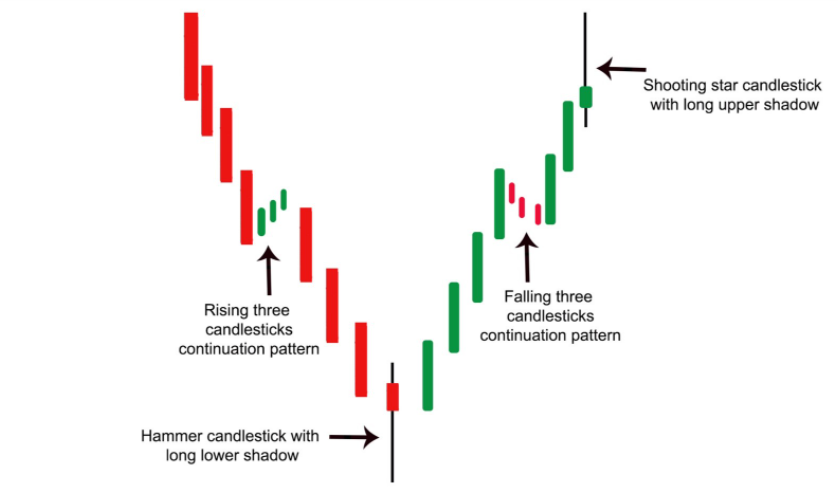 The opposite happens in a downtrend. Following a strong move downwards, the trend stalls briefly as price action slows down. Three or so small reaching candlesticks appear and all drift upwards, opposite in direction to the prevailing downward trend.

Once again, the combined range of the small upward drifting candlesticks is less than the span of the last downward candlestick before the pause. The market subsequently resumes its previous direction of travel downwards with a strong candlestick that unequivocally re-establishes the dominance of the slackened downtrend.

From the above, it becomes clear that the appearance of certain candlestick patterns on a price chart carry a prognostic significance that should not be ignored. I hope you’ve found this explanation useful to understanding the basics of candlestick patterns and how useful they are in predicting the markets next move.

The Importance Of A Trading Education

Identifying patterns, psychology, routine, personality, strategies, software and training are incredibly important for being able to reliably make money from trading. Whether this is your first time taking on the forces of the market or you’ve had limited success and want to improve that potential, we have a course that’s right for you. If trading sounds interesting to you, then please remember to check out Learn To Trade Online; it’s a FREE one-day training course that we regularly hold and covers day trading, swing trading and many of the basic concepts. Are you ready to start your trading education? Good news, registration is now open for our Pro-Trader Programme! Join now and learn how to generate a reliable second income that fits around your professional schedule or even turn trading into your full-time job. Click here for more information. 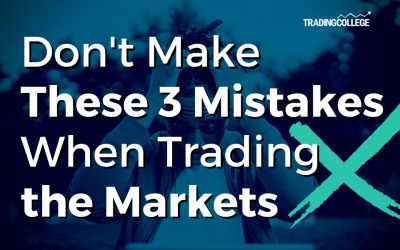 Don’t Make These 3 Mistakes When Trading the Markets

Learning to trade can be a fun and interesting process but all that information flooding towards you can all too often seem very daunting. The human brain has a fairly limited processing capacity (some more than others) and when you overload your brain it is easy to... 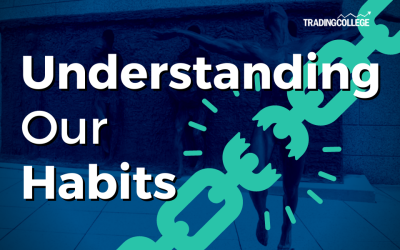 Habits make up a significant proportion of everyone’s daily lives, often without us even realising it. Habits are quite simply patterns or behaviours repeated over time, day after day, until they become second-nature to our subconscious. It’s thought that our brains... 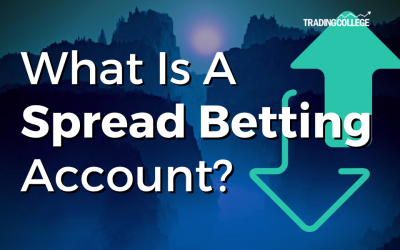 When you’re brand-new to trading, one of the first big questions you might ask yourself, particularly when opening a new account with a broker, is “What the heck is spread betting?” You can kind of remember the names of the major stock exchanges, have just about...