April’s Trader of The Month 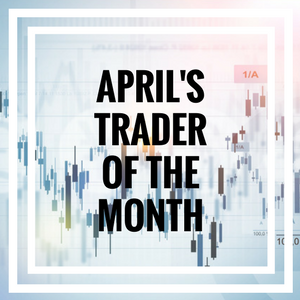 Our Trader of the Month for April is Steve Harris, who is halfway through his Mentorship at Trading College. Steve’s commitment to the learning process is impressive. His motto is, “You shouldn’t do anything without getting an education.” And he believes in learning to walk before you learn to run; he is only using very small position sizes while he’s still on the learning path, happy to wait until he sees more consistent profits before taking on more risk.
Steve retired from a very successful and long career in sales about a year ago. He had always worked in a self-employed capacity and hadn’t taken out a private pension. When he decided to retire, he was very aware that he needed to find a source of income to avoid having to rely on his savings to top up his state pension.
Some years previously, Steve had looked into the idea of trading but had been put off by negative stories he heard about spread betting. As he approached retirement, he thought he’d look into it again. He came across Trading College and attended a coffee morning. Impressed by what he saw as an education-led approach without any “get-rich-quick” promises, Steve decided to enrol on the PTS course. He enjoyed it but found there wasn’t enough “action” for him in swing trading. Steve wanted to do more; he wanted to learn how to day trade. So in September last year, he enrolled in the Mentorship Programme.
Steve spent about a month using a demo account, doing as much trading as he could while he really got to grips with the strategies he’d chosen. “With my coaches’ advice, I decided to focus on two or three strategies that I could learn by heart. I studied hard every day, watching all the videos and looking at the charts, joining the live trading room and getting really familiar with my chosen strategies.” Steve advises any beginner to focus on two or three strategies rather than to attempt to learn them all. “And while you’re learning, I believe you should always trade with the trend and not do any counter trading until you are very experienced. I think the key is, keep your trading as simple as possible as you’re learning.”
Going from a demo to a real trading account is a jump that Steve says, “Really tests your emotions. You don’t really feel too bad when you lose money that isn’t real. When it’s your money you’re losing, it’s really hard to control your emotions. But that’s what you have to learn to do or it will affect your trading decisions.”
Steve is very methodical and structured in his approach to learning and has a specific objective. “I’m after a steady income; I’m not chasing huge, unrealistic profits.” He has made some careful calculations in terms of his goals. “I want to be winning at least 80%, preferably 85%, of my trades before I start exposing more of my account. Currently, I’m at around 75%, so I’m getting there.” Steve risks just 1-2% of his account on any one trade and only has around 4-5 open positions at any one time. Once he reaches his target of winning 85% of his trades on a consistent basis, he says he’ll raise the risk to 3%.
Steve’s modest ambitions are refreshing, and his commitment to the longevity of trading is inspirational. “The biggest thing you need when you start to learn about trading is patience. If you don’t have patience, you’ll get frustrated pretty quickly.”
To sum up Steve’s top tips for new traders, he says:

It sounds like Steve’s been listening to his mentor!
Steve has realistic aspirations. He simply wants to get good enough to make a reasonable income to see him through his retirement. But he also very much enjoys his new venture. “I love trading. I’ve become completely passionate about it.” And now he also wants to get good enough to teach his partner how to trade because, now she’s seen Steve’s passion for trading, she’s got the trading bug too! We wish Steve and his partner every success on their lifelong trading journey.