Below is the daily chart of Anglo American PLC, a UK listed multinational mining company. It is the world’s largest producer of platinum (accounting for about 40% of global output) but it’s also a big player in the diamond, copper, nickel and iron ore markets so, as you can see from all of the green, it’s been pretty successful recently. From left to right, the price rise has been steady and the stock has been moving in a very nice trend so we’re going to use Anglo American as an example to delve into these movements and show you how they correlate to the various indicators and signals in our signature software, the mighty Pro-Trading System.

On the chart, you can see the Pro-Trading System (PTS) indicator, this changes the colour of the candles and helps to ensure that you could try to stay in the trend for as long as possible. At the top right of the chart you’ll also see that there are blue numbers listed; these are the Pro-Trading System’s targets. The software gives some easy to understand potential risk management and probability-based profit targets. As you can see in Anglo American’s case, the stock price has exceeded these targets as the rise has been so forceful.

The circles on the chart show other areas where some other potential moves were identified on this particular share. The bottom section of the chart is Trading College’s proprietary Storyteller Indicator. When the histogram moves from the lower bound to the upper this can also be considered as a potential entry for your trade (we call this the Momentum Trigger). However, it is when they both get generated at the same time that the probability that the target could be met increases.

Like any form of trading the management of risk is extremely important. With the Pro-Trading System, luckily, this is done for you. Our trading software suggests where you could put your stop loss based on the historical volatility of the asset. Personally, I put the stops below the previous wave lows to give me some more space but, as our statistics show, it is perfectly viable to use the Pro-Trading System’s stops alone. 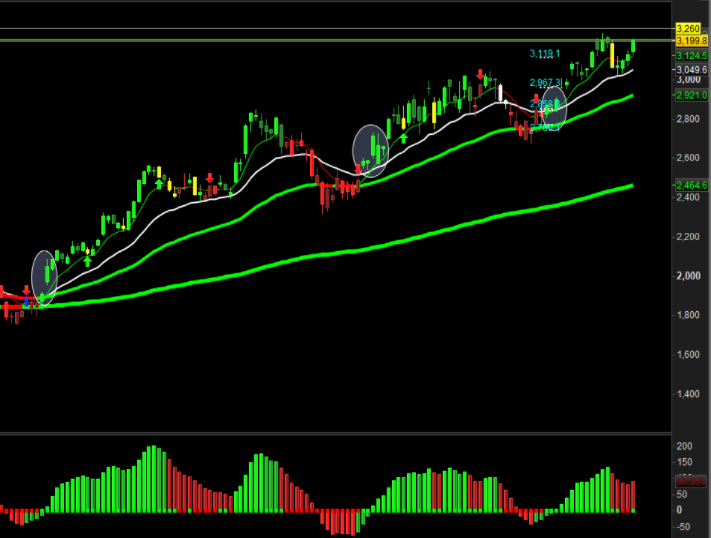 The chart below is the monthly chart of the same asset class (Anglo American – $AAL). On this chart you can see a different set of numbers giving us different targets. Above I mentioned that a trade’s success could be more probable if the two signals, both the Momentum Trigger and the PTS, arise at the same time. In this example I would like to draw your attention to the implications of the signals turning up on two different timeframes (Daily/Monthly). If there is already a PTS signal on the monthly timeframe and the daily chart brings up another PTS signal in the same direction, this could also increase the likelihood of the signal having a higher probability of success. Like any form of trading, it is very important to remember that nothing works 100% of the time. There are also some other kinds of analysis that you may want to throw on top but with these systems alone there could be a greater chance of success. 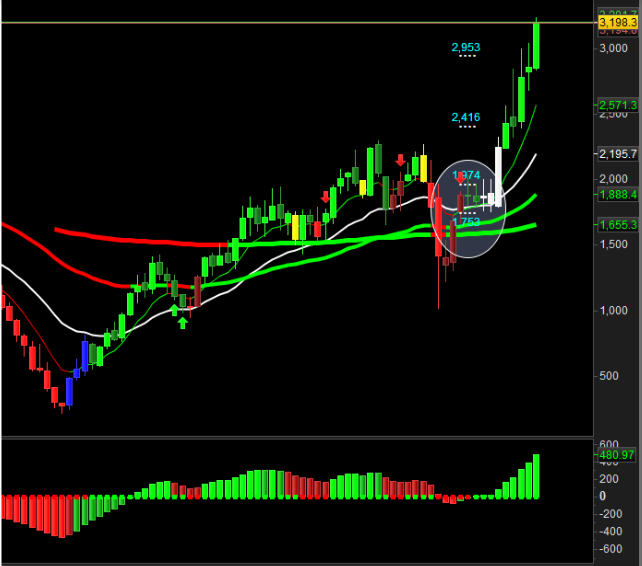 In the Live Trading Room, we highlight potential stocks and shares that match the criteria of the one outlined here today. We have been speaking about the copper and base metals miners for a while and they have recently been accelerating in the right direction. Often when a certain sector is in fashion we usually get a lot of trigger and this helps us make sure that we do not miss out on any booming markets. We have a bustling community in the Live Trading Room and the students of Trading College also come up with their own ideas of trends they’ve spotted when scanning the charts, which we monitor and talk through them together to make sure that everybody is on the right track.

The Importance Of A Trading Education

Identifying patterns, psychology, routine, personality, strategies, software and training are incredibly important for being able to reliably make money from trading. Whether this is your first time taking on the forces of the market or you’ve had limited success and want to improve that potential, we have a course that’s right for you. If trading sounds interesting to you, then please remember to check out Learn To Trade Online; it’s a FREE one-day training course that we regularly hold and covers day trading, swing trading and many of the basic concepts. Are you ready to start your trading education? Good news, registration is now open for our Pro-Trader Programme! Join now and learn how to generate a reliable second income that fits around your professional schedule or even turn trading into your full-time job. Click here for more information.